This article describes the different types of fittings that are commonly used for high-end racing and street performance applications. The fittings we will discuss are Adapter Fittings (also called Standard, or Union), Port Fittings, and Pipe Fittings, as well as thread types and size standards associated with each.

Before we get into the types of fittings we’ll first define the thread types used on the fittings, as well as discuss applicable AN standards.

Tapered Thread – Tapered thread, also known as Pipe Thread, typically uses a 2° angle on the threads (instead of running parallel).  This allows the threads to interfere and seal off.  Threads must be clean and precise, to make up for gaps between threads that allow for leakage.  Pipe Fittings, which use Tapered Thread, don’t use O-rings, but rather must use compounds or Teflon Tape to help seal the threads. National Pipe Thread Taper (NPT) is a U.S. standard for tapered threads used on threaded pipes and fittings. 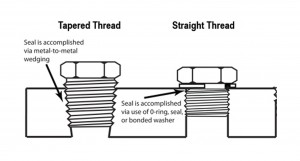 AN Standards   High-end racing and performance fuel delivery systems most frequently implement fuel lines and fittings manufactured to AN Standards. During WWII the US military set specification standards for fasteners and fluid fittings used on military equipment. These standards are headed under “AN” which is the abbreviation for “Army-Navy", but is also known as "Air Force - Navy Aeronautical Standard".  After the war many used surplus aerospace parts were used for racing, and thus introduced the AN standard into the racing and performance world. AN Standards as Applied to Fluid Carrying Tubes and Flexible Hoses In the case of tubes and flexible hoses used to carry fluid, “AN Size” designates the outer diameter of the hose or tubing in 1/16” increments.  For example an AN size 2 designates a tube OD of 1/8” (2 x 1/16”), the tube OD of AN size 3 is 3/16” (3 x 1/16”). Note: The AN size number is correctly displayed with a dash before the number. AN Standards as Applied to Fluid Carrying Fittings Each AN size also references a standard male and female thread size that is used on fittings - such as hose end fittings, adapters, and port fittings. This is known as “AN Thread Size”.   AN fittings have Straight Thread, and use O-ring seals. The O-ring size is typically defined by the "AS" standard.  Dash Numbers are typically assigned based on the size.  Boss-Seal style O-rings are typically in the "900" Series. For example -906 is for -6AN ports, and -908 is for -8AN ports. AN Size and AN Thread Size Reference Chart The chart below references the tube (or flexible hose) OD and thread size for each AN size.


*Note: While these measurement s reflect AN standards, actual ID and OD can vary slightly from AN specification depending on supplier. BE SURE TO USE COMPATIBLE FITTINGS ONLY!  Mismatched lines can come apart under pressure.  Verify that inner diameters match!

Adapter Fittings Adapter Fittings – also known as Standard Fittings or Union Fittings – are commonly used to connect fuel line tubes and hoses to fuel pumps, fuel regulators, and fuel filters. While Adapter Fittings are available in SAE size configurations, most high-end racing and performance fuel systems use those manufactured to AN standards (document AN815, defines standard union fittings). With AN versions, the fitting ends typically use a 37° cone on each end (as per Military Standard MS33656). AN standards dictate use of Straight Thread for Adapters, requiring use of O-rings. Special port machining is done to "capture" and properly compress the O-ring, as too much stress can damage the O-ring, and too little can cause leakage.  These port standards are designed to precisely "load" the O-ring automatically during installation. Use of The O-ring seals allow for greater sealing ability with very high reliability of installation as compared to Tapered Thread using sealing compounds or Teflon tape. 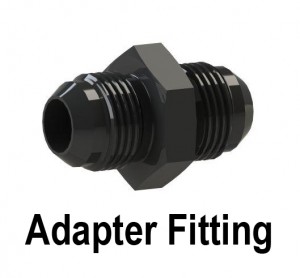 Pipe Fittings Pipe Fittings can be used to connect fuel lines to the port on a fuel pump or fuel pressure regulator, as well as connect fuel pressure gauges to gauge ports. One end (the port end) of the fitting can be described as a male open-ended cylinder with Tapered Thread (also called Pipe Thread) on the outer diameter. This fits into a female port of corresponding size and thread pitch. The other end typically uses a 37° cone and Straight Thread. The Tapered Thread on the port end of the fitting must use sealing compound or Teflon tape to help avoid leakage. However, in high-pressure fuel system applications this method has proven more leak prone than the O-ring seal method used with Straight Thread fittings. As well, Teflon tape has the potential to leave debris in the fuel systemWhich leads us to the description of Port Fittings. 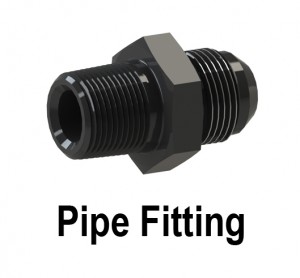 Port Fittings Port Fittings (also known as O-Ring Base or ORB fittings) function just like Pipe Fittings, but with the following distinctions. Port Fittings conform to AN standards - typically per Military Standard MS33649. The cone end uses Straight Thread and a 37° cone. The male port end of the fitting uses Straight Thread, and is received by a female port of corresponding size and thread pitch. Port Fittings require use of O-rings. Like AN Adapters, special port machining is done to "capture" and properly compress the O-ring which allows for greater sealing ability with very high reliability of installation as compared to Tapered Threads using sealing compounds or Teflon tape. This reliability makes Port Fittings the preferred choice over Pipe Fittings for high-end racing and performance fuel system applications. It should be noted that while manufacturers of high performance fuel delivery systems often specify Port Fittings for connections to fuel pumps and fuel pump regulators, the connections to fuel pressure gauges, via gauge ports, most often utilize Pipe Fittings. This is because the vast majority of the in-line fuel pressure gauges on the market use Pipe Fittings for connection. 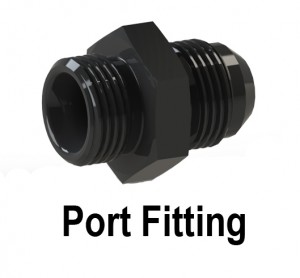 We hope this overview has provided a better understanding of the differences and uses of Straight Thread versus Pipe Thread, as well as the types of fittings used. If you have further questions about fuel delivery system plumbing, please contact Fuelab Technical Support.
Fuel Lines
,
Fuel Plumbing
,
AN
,
AN Thread
,
AN Standards
,
AN Specifications
,
Adapter Fitting
,
AN Adapter Fitting
,
Straight Thread
,
Tapered Thread
,
Pipe Thread
,
Port Fitting
,
Pipe Fitting