The Best Location for a Fuel Pressure Regulator 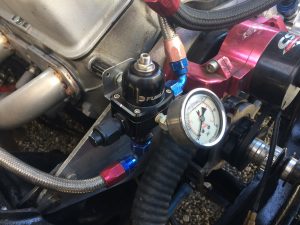 Location, location, location! It’s not only the number one rule in real estate, it’s also a contested point when mounting a fuel pressure regulator. There are those who believe it’s best to place a fuel pressure regulator close to the fuel’s destination (fuel rail, fuel log, carburetor, diesel or direct injection pump), while others feel it’s just fine to place it further away; sometimes at the opposite end of the vehicle. Either philosophy could be correct, depending on the application.

Choice of regulator location can affect ease of installation, adjustment, and appearance. Some people may elect to mount the regulator in a space that is convenient, and/or easy to access. Or, they may mount it in an out of the way location to achieve “a cleaner look”.

Diesel Systems – OE or Mildly Modified For some OE or mildly modified diesel systems, pressure error or differences in pressure do not affect the system as much. For example, FUELAB lift pump systems have integrated relief valves regulating the pressure within the assembly. For applications that are not subject to high g-forces and do not require very highly accurate pressure, this regulation point is not a significant distance from the injection pump to cause an error, or a loss of pressure, during high demands. The level of performance is acceptable.

"Lower Power" Gas or Ethanol Systems Carbureted or EFI systems that are not using extreme amounts of flow rate may not lose significant pressure regulation when having added distances from the carburetor, fuel log, or fuel rail. Then there are the applications in which close placement becomes more important.

High Power Applications High power applications (500+ horsepower) are typically characterized by a great amount of difference in fuel flow rate between idle and full throttle. When the throttle is applied quickly, the resulting sudden and large increase in fuel flow rate creates fuel pressure loss between the regulator and the fuel destination. Placing the regulator close will reduce the pressure loss. It should be noted that that high performance diesel applications which use a lift pump with an internal regulator can also benefit from an external regulator that is close to the injection pump.

“Extra Low Fuel Pressure” Systems Typically, low pressure carbureted or injection pump systems can experience a greater difference in "percentage" of change regarding error. A 1/2 PSI change in fuel pressure is not significant for 60 PSI EFI systems, however for a 2 PSI system it can be dramatic. Close placement of the pressure regulator is recommended.

It’s important to choose the correct location for your fuel pressure regulator. In many cases, you can mount the regulator in a location to satisfy ease of installation, adjustment, and appearance. However, in the cases of high power applications, extra low fuel pressure systems, and high-g launches, it’s best to mount the regulator as close to the fuel delivery destination as possible. It can make the difference between being the winner, or being the loser.