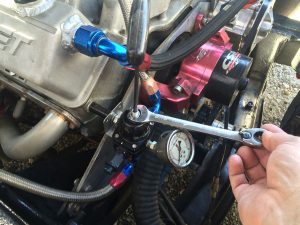 Blocking Style Fuel Pressure Regulator (aka: Traditional Style) Below is an example of a Blocking Style Regulator. Please note the cut-away image shows the fuel regulator in the valve closed position. 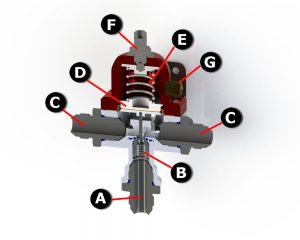 With a blocking style regulator, fuel enters through the inlet port (A) and travels past the fuel control valve (B) and then is distributed through an outlet port to the carburetor. In this example, there are two outlet ports (C). Fuel flow and pressure are controlled by the fuel control valve that is actuated by a diaphragm (D). The diaphragm’s movement up and down is limited by a spring (E). Fuel pressure (psi) to the carburetor is set with a threaded adjustment mechanism (F). A vacuum/boost reference port allows the regulator to compensate for boost pressure with forced induction applications (G). Blocking style regulators are characterized by a lack of a fuel return line from the regulator back to the fuel tank. When there is no fuel demand from the engine the fuel flow is brought to a halt by the fuel control valve (B). Thus, no fuel is flowing into or out of the regulator. Please note, Blocking Style Regulator function is described in greater detail here: https://fuelab.com/fuel-pressure-regulators-low-pressure-applications/

Bypass Style Fuel Pressure Regulator (aka: Return Style) Below is an example of a Bypass Style Regulator. Please note the cut-away image shows the fuel regulator in the valve closed position. 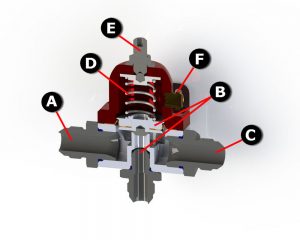 With a Bypass Style Regulator, fuel enters through the inlet port (A) and travels past a fuel bypass valve/fuel return line port (which governs fuel flow and pressure) (B) and then is distributed through an outlet port to the carburetor (C). Opening and closing of the bypass valve is limited by a spring (D). Fuel pressure (psi) to the carburetor is set with a threaded adjustment mechanism (E). A vacuum/boost reference port allows the regulator to compensate for boost pressure with forced induction applications (F). Bypass Style Regulators are characterized by a fuel return line from the regulator back to the fuel tank. When there is no fuel demand from the engine the fuel continues to flow as it is “rerouted” by the fuel bypass valve (B) away from the engine and to the fuel tank: As opposed to the Blocking Style Regulator which halts fuel flow completely.

Now, let’s get back to pressure creep. As fuel pressure reaches the maximum value to which a Blocking Style Regulator has been set, the fuel control valve must shut off inlet pressure from getting to the outlet port. This action requires extra force (fuel pressure) to fully shut the valve off and creates a spike in fuel pressure as the valve reaches the closed position. This is often termed “Pressure Creep”. The graph below demonstrates this condition. Of note, Bypass Style Regulators do not experience this problem since fuel never stops flowing. 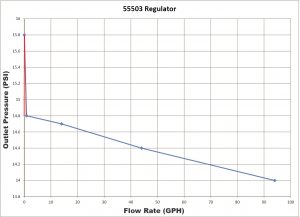 Pressure creep can cause fuel pressure readings to be inconsistent when taken with the fuel control valve fully closed, and the engine shut off (but with the fuel pump energized). Meaning that the engine can be run and shut off multiple times, and pressure readings taken between each run/shut off cycle can vary. This makes it difficult to accurately and consistently adjust fuel pressure.

Avoiding Pressure Creep While Adjusting Fuel Pressure with a Blocking Style Regulator To properly adjust fuel pressure with a Blocking Style Regulator, pressure creep must be eliminated. This can be achieved by keeping a small amount of fuel flowing through the regulator while making adjustments. The most popular method for doing this is operating the engine at idle speed. However, there are times when this method won’t work. Such as when adjustments need to be made with the engine shut off (with the fuel pump energized). Or in the case of nitrous oxide applications that implement an additional regulator, fuel only flows through this regulator when the fuel solenoid is activated under full throttle. So, how can a small amount of flow be provided in these situations? The answer is bleed returns which can be used to simulate flow rate (trickle flow). Here are a few ways to set bleed returns: Plumb a permanent -3AN fuel return line from the outlet port(s) to the fuel tank -3AN line provides sufficient restriction (use of -6AN line would provide too much  flow and throw off readings) More lines may be plumbed for additional regulators If -3AN line is used and is connected to an otherwise unused port, it can be permanently left in place as it is restricted enough not to cause capacity issues. Otherwise, the line(s) can be disconnected when not in use, and the outlet plumbing is reattached to the regulator, and/or the unused outlet port is plugged. Or: External Flow Source: Establish means to quickly hook up a temporary fuel line through which fuel can flow into a fuel safe container outside of the vehicle. This can be done in different ways including: A "tee" fitting that can be put place at the gauge port, to which the fuel line is attached A specialty adapter fitting that can be placed inline in the outlet plumbing, to which the fuel line is attached The fuel line can run through a valve or orifice to provide a restriction to flow small amounts of fuel. Note: Use of a higher flow rate valve may also be used to simulate higher flow rates as well to help judge general capacity.